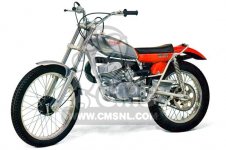 In the Early 1970’s, Honda and Yamaha both produced competitive trials machines to try and end the domination of the Spanish manufacturers, Ossa, Bultaco and Montesa.

Suzuki’s first competitive trials machine was actually developed and built in the U.K by
Graham Beamish in 1974. It was superb! 50 models of the Suzuki built RL250 were sent to Beamish Motors to sell through the Suzuki network, these standard models however were not competitive.

Quick to realise the shortcomings of the machine in its standard form, Beamish enlisted the help of local trials ace Brian Fowler to set about modifying these machines so that they would prove more acceptable to British trials riders. The short front mudguard was lengthened and its mountings modified so that the front wheel would not clog so easily with mud and the overall gearing was lowered too. The compression ratio of the engine was lowered, and the combustion chamber reshaped, whilst the engine itself was converted to run on petrol premix and not on the CCI lubrication system fitted as standard. The flywheel magneto was increased in weight by about 1.75 pounds to provide the engine with better torque, and the carburettor was fitted with a restrictor, to reduce the choke size from 28mm to 25mm. These and other minor modifications improved the machine enormously and all 50 modified machines were sold with surprising ease.
Having observed the world-wide failure of the standard RL250 'Exacta' model, Beamish Motors made Suzuki an offer for all unsold machines, which the factory was only too pleased to accept.

Beamish did not rest on their laurels and soon commissioned a new frame by Mick Whitlock. This frame became known as the ‘Whitehawk’ and now is sought after by the classic twin-shock trials fraternity.

Beamish took delivery of 100’s of the old Suzuki RL250 ‘Exacta’ models from the USA and sold 1200 of them, 150 of which were exported to mainland Europe and a couple surprisingly to Japan!

The Suzuki factory was delighted with the success of the Beamish operation and as a mark of their approval, they gave Beamish Motors the world-wide manufacturing rights for Suzuki-powered trials machines, an unprecedented step for a Japanese manufacturer to make. They agreed to supply all of the components that Beamish Motors needed to build complete machines and also undertook to design a larger capacity engine unit (the black engine model) to Beamish requirements.

For the 1976 season, Whitlock supplied a completely redesigned frame that was both lighter and stronger, to form the basis of the Mark 2 RL250 model. British-made sidepanels, mudguards, seat and petrol tank were used for the first time and the colour scheme was changed from the original orange and silver to yellow and silver. Also of British manufacture was the top fork yoke, which provided a setback handlebar position and Girling gas shock absorbers. A sidecar version was made available too (the only manufacturer to produce a dedicated 'outfit'), along with a reed valve induction system as an optional extra. And so the world wide sales success of the Beamish RL250 model continued.

1977 saw the continuation of the development of the RL325 (black engine) model, whilst the production RL250 gained a British-made computer-designed exhaust system, revised cylinder porting and alterations to the gearbox. For the season, the colour scheme was changed to black and red (Heron Suzuki colours).

The model evolved nicely over the following years, with various upgrades, new chassis and suspension systems all helping to mark the Beamish Suzuki as one of the most successful trials machines of it’s day. 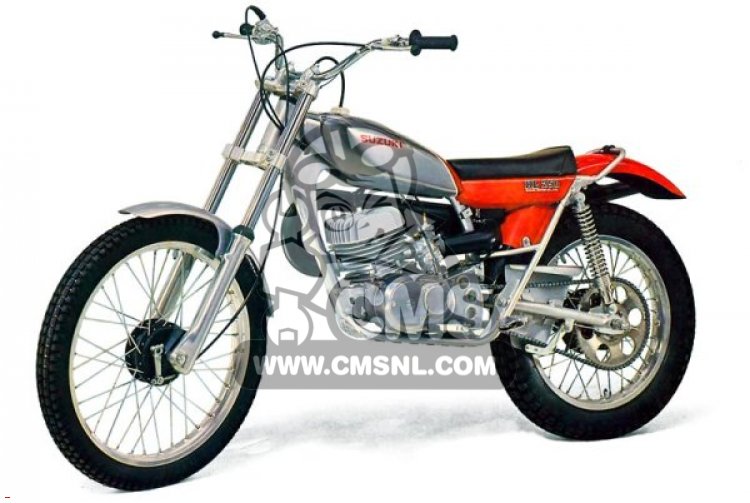