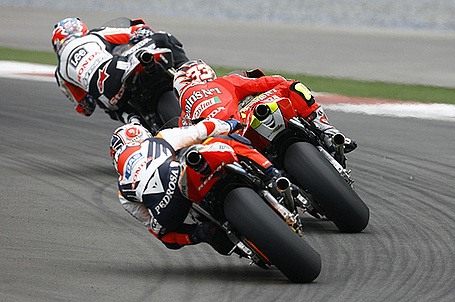 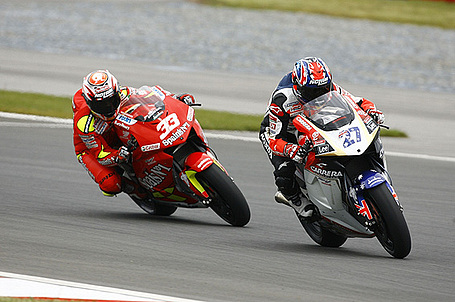 After yesterday’s rain, the clouds threatened but failed to deliver another deluge and the 22-lap MotoGP contest got underway in dry conditions. Poleman Chris Vermeulen (suzuki) got the holeshot into turn one followed by Sete Gibernau (Ducati) and early front man John Hopkins (suzuki).

But behind this early lead trio lay the eventual bosses of this race: Hayden in fourth, then Stoner and Melandri. Dani, who started from row six after a fruitless qualifying effort had already fought his way his way to 13th by the end of lap one. Melandri, who endured a fifth row start after an equally troubled qualifying performance had shot up to sixth via a lightning-quick launch.

Gibernau had assumed the lead by the end of lap one with Hopkins and Vermeulen in second and third followed by Stoner, Melandri and Hayden. Dani was still scything though the field and by lap three he lay ninth. He then set an early fastest lap of 1m 53.884s on the next circuit of the 5.430km track.

As Vermeulen dropped off the pace Stoner, Hayden and Melandri matched it, then bettered it to put the chase on the lead duo of Gibernau and Hopkins. As the early pressure began to tell, the group of nine riders who had been covered by just three seconds in the early laps began to drift further apart.

Gibernau still held the initiative at the front, but Stoner’s pressure on Hopkins began to tell and by lap eight, the order was Gibernau, Stoner, Melandri, then Pedrosa, who had now slotted in another fastest lap of 1m 53.305s. By lap ten Dani was third.

Exactly on mid-race distance the pattern was set as Gibernau faded and Melandri led the pack into turn one on lap 11. Pedrosa lay second, Hayden third and Stoner fourth. Then Dani turned the screw and stole the lead from Melandri at the final turn complex at the end of lap 11.

Four Honda riders now controlled the race from the front and with eventual fourth-place finisher Valentino Rossi (Yamaha) sitting in fifth, more than six seconds adrift of the leaders, it was clear that, barring a mass crash, the podium places would be disputed among the fast foursome.

With three laps to go Stoner held a 0.6 second advantage over Melandri, with Pedrosa in close attendance and Hayden losing touch by a second and a half as the finale loomed. Melandri had tasted his first ever MotoGP win here last year and there was a feeling his experience might count on the last lap.

Sure enough mistakes were made. Dani lost the front on the entry to turn one and crashed out to remount and finish 14th. It was a sad end to a glorious ride. Stoner now had only Melandri to deal with, but ‘Macio’ is a tough customer with two years’ experience in the class. He made it tell with a rugged out-braking manoeuvre into the final complex and Stoner could do nothing to resist.

Melandri said, “I thought that would be a good race and I was right. But from row five I had no idea I’d be involved at the front. I got a really good start and the bike was great in these conditions on the day. But Casey is hard to beat and now it’s going to get harder and harder, he rode amazingly well today.”

Stoner seemed happy with second, even though he so narrowly missed out on matching the record of Freddie Spencer as the youngest ever winner of a premier class race at 20 years and 196 days old.

He said, “I didn’t know how big the group was, and when I realized there was only a few of us, I ran the race knowing I’d have to close on people at some stage. It was great riding with all those others and seeing how much they all move about. You’ve got to be a bit careful with these bikes because they don’t stop as fast as a 250 either.”

Nicky was sanguine about his third place. “I had a front brake problem on the startline when the tyre warmer melted onto one of the brake discs. The brakes were never right and I was missing apexes everywhere. I couldn’t get into a rhythm so I’m a bit disappointed overall. But I suppose leading the World Championship by a point is a consolation.”

Dani said, “Until the last lap I think the race was good. I got a good start and recovered a lot of positions at the beginning. Then I got into a very good rhythm and I was able to overtake riders and catch the leaders, which was the main plan before the race. Near the end it was difficult because I lost some time and there was a little gap to the leaders so I was not completely with them. Then I crashed as I was entering the first turn. I’m sorry for my team because they were really good for the whole weekend.”

Toni Elias (Fortuna Honda RC211V), in fifth, said, “I didn't get a good start but bit-by-bit my rhythm improved and as the laps went by and the fuel tank got lighter I got more comfortable with the bike. Together with Valentino we cut through the pack and that helped me to finish fifth. On the final lap I tried to pass him but it was impossible. I’m satisfied with the way the race turned out but I’m still not quick enough over the first few laps so I have to work on this. I want to congratulate my team-mate Marco for his great performance today.”

Makoto Tamada (Konica Minolta Honda RC211V), in tenth, said, “After a good start I risked crashing at the first corner and for this reason I lost some positions. I did not have very good grip with the rear tyre so I was never been able to run at a particularly quick pace. Although I did manage to overtake Gibernau quite near the end, in the last series of corners preceding the straight. In comparison to Qatar, the positive note is that the feeling with my RC211V seems to be about to return to a good level.”

Kenny Roberts (Roberts KR211V), 13th, said, “I had to struggle out there today I just didn’t have the reserves. I was running low 1m 56s lap times and it was only at the end that I started running consistent laps in 1m 55s. In fact I set my fastest lap time with two laps to go. We just don’t have the corner entry speed we need. We don’t have grip, it’s as simple as that. We have the same engine and tyres that won the race so we have work to do.”

Series points leader Jorge Lorenzo (Aprilia), two times winner so far this season, was taken out in a turn one crash on the opening lap. He was hit by Shuhei Aoyama (Repsol Honda RS250RW) in a multi-bike melée and took no further part in the race.

After the turn one chaos, the intensity never faded. Dovi, Barbera, Hiro Aoyama, veteran Roberto Locatelli (Aprilia), Yuki Takahashi (Humangest Racing Honda RS250RW) and Alex de Angelis (Aprilia) rode in and out of each other’s wheel tracks for an entire race with the rest of the field in limbo.

Sometimes they clashed, sometimes they out-braked themselves trying to shake off the attentions of each other, but inexorably, they prepared to fight each other on the final lap.

As they exited the fearsome turn 11 on the final lap, four riders were fighting for the same stretch of tarmac and contact was made. De Angelis clashed with Barbera and his machine left the track, he stayed on and eventually halted on the tarmac run-off at the bottom of the hill – all from 160mph.

Meanwhile Dovi, Barbera and Aoyama slugged it out into the complex with Aoyama emerging on top as they took the flag. Dovi is still searching for that elusive first win in the 250cc class, as is De Angelis – but what a race.

Dovi said, “I’m happy to be the leader of the Championship, but I’m not satisfied with today’s third place. I’m quite constant in terms of results and I know I can stay in front, but I want to win and at the moment we are not quite doing it.”

His team-mate Takahashi said, “I started well and I tried to stay with the front group, but my lap times weren’t good enough. At the middle stage of the race, the rear tyre started to lose grip and it was difficult for me to overtake. I made a small mistake during the last lap and I lost time, increasing the gap with my rivals. I can do better next race.”

The overall World Championship table shows Dovizioso in the lead with 52 points, Lorenzo on 50 and Hiro Aoyama with 46.

Hector Faubel won the 125cc race from Alvaro Bautista with Sergio Gadea (all Aprilia) in third. Gabor Talmacsi (Humangest Honda RS125R) was running as high as fifth in the early stages before he faded to finish sixth.

He said, “Unfortunately, we haven't sorted out the suspension problems we’ve been having since the first race. The rear suspension doesn’t work well along with the tyre and so after few laps the bike starts to lose grip. This happened today. I started well but then I had to slow down. Anyway, we are not so far from the top riders and 10 seconds is not a big gap. I’m happy to be the first Honda rider.”

Reigning World Champion Thomas Luthi (Elit Grand Prix Honda RS125R) finished 12th and said, “I got a good start and could hold my position in the group easily. But when the tyres started to go I was having a lot of slides particularly in the four left hand corners. I just could not run a good corner speed. On the last lap I out-braked the riders in the group I was with but at the last corner I had a slide and was too low in the corner and they got me before the line.”

link to this page:
https://www.cmsnl.com/news/honda-men-monopolize-podium-in-motogp-thriller_news295.html